Amazon's new series, The Lord of the Rings: The Rings of Power, has been met with both positive and negative reactions – the only negatives coming from long-time Tolkien fans like myself. John Ronald Reuel Tolkien is a well-known author who has impacted millions of readers through his writing. He is best known for The Hobbit, The Lord of the Rings, and The Silmarillion. He was openly a devout Catholic and shared that his trilogy The Lord of the Rings, in particular, was a "fundamentally religious and Catholic work."

Having grown up in a family that watched the extended edition of the original Lord of the Rings trilogy every year and quoted it almost daily, I was skeptical of a modern take on the incredible lore created by J.R.R. Tolkien. I decided to give the series the benefit of the doubt, and so far have been thoroughly entertained. It is stunning visually and is a gift to be able to re-enter the world I have become so heartwarmingly connected to. The original Lord of the Rings films have a quality that makes me tear up by the very first note of Howard Shore's "Concerning Hobbits." The story is so powerful and so clearly reflective of Christianity that it reminds me of God's promises with every watch.

Although we are only a few episodes into season one of The Rings of Power, which is planned to run for five seasons, I am already seeing similar themes that stand out against typical modern-day television. When Amazon first announced the new series, many feared it would take on a dark, sensual, and gory feel similar to that of the popular show, Game of Thrones. I am happy that they have stayed true to their story and are producing a family-friendly show that doesn't rely on selling worldly values. They are able to tell a compelling, entertaining story that not once feels lacking by the exclusion of sexual or gory scenes. It is rated TV-14 for some violence and frightening scenes but avoids profanity, nudity, and over-the-top violence. If you are unsure if this is a series you could watch with your family on a Friday night, you can read Michael Foust's in-depth review here.

So, how exactly does this series stand out in present-day media? Let's look at three biblical themes we can see so far. 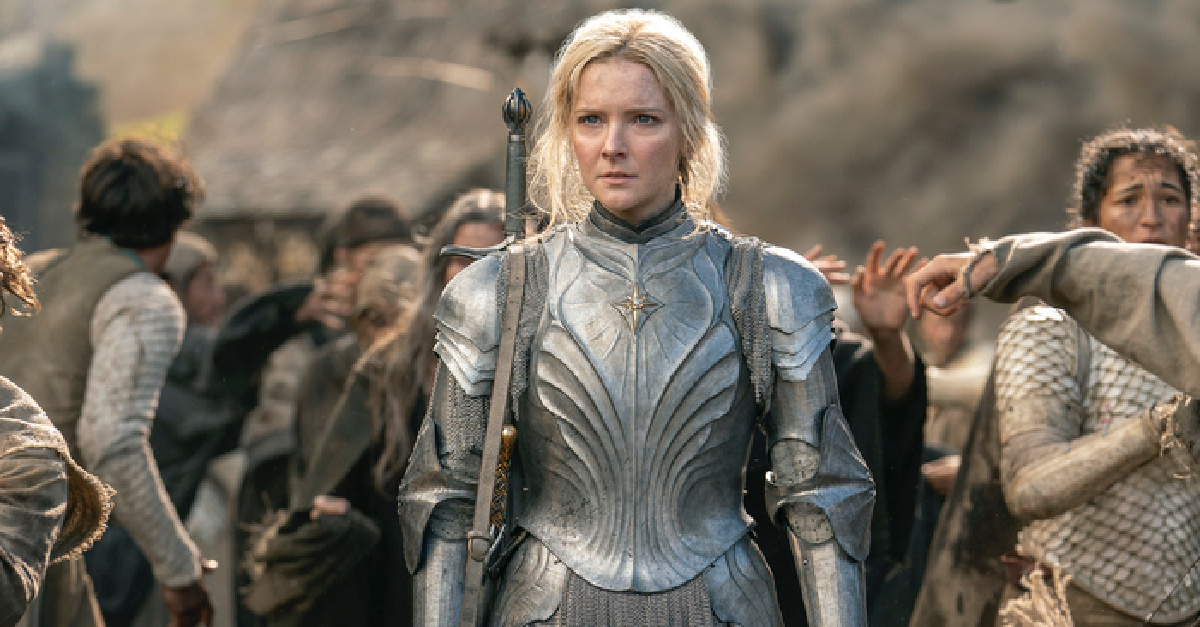 The series follows a young and determined Galadriel, known to fans from the original films, as she seeks out Sauron and the growing evil in Middle Earth. In a very accurate depiction of humankind, the others refuse to believe that there is a present threat in their world. Although Morgoth (the antagonist in The Silmarillion) has been defeated, his successor Sauron gains strength in hiding. In an effort to convince her friends of the threat at hand, Galadriel says: "Evil does not sleep, Elrond. It waits. Until the moment of our complacency, it blinds us."

What a true statement. As Christians, we are called to be on guard, always aware of the ways Satan is trying to deceive us. Spiritual warfare is real. There is a constant fight for your heart, friends. Be on guard. Don't fall into a state of complacency in your faith.

"But the wicked are like the tossing sea; for it cannot be quiet, and its waters toss up mire and dirt." Isaiah 57:20

"Put on the whole armor of God, that you may be able to stand against the schemes of the devil. For we do not wrestle against flesh and blood, but against the rulers, against the authorities, against the cosmic powers over this present darkness, against the spiritual forces of evil in the heavenly places." Ephesians 6:12

Two scenes come to mind when I think of light overcoming darkness. They are visual illustrations of good overcoming evil - the Lord's ultimate victory against Satan. In episode four, we see the human village healer Bronwyn team up with elf warrior Arondir as they rescue Bronwyn's son, Theo. Orcs chase them through the thick forest until they stumble into an open field. Out of breath and preparing for more fighting, they look to the sky as the sun breaks through the morning clouds, enveloping the tall grass in warm sunlight. The orcs begrudgingly retreat into the dark forest, unable to dwell in the light. It is a chilling illustration that reminds me of Gandalf's quote in The Two Towers: "Look to my coming at first light on the fifth day. At dawn, look to the East." Gandalf, Eomer, and the Rohirrim ride down the mountain, joining the battle for Middle Earth at Helm's Deep. The sun rises behind them, streaming onto their enemy and leaving them disoriented. These scenes are beautiful representations of good and evil. Sin thrives in the darkness but has no chance in the light. When we bring sin and shame to light, it holds no power there. If something has a hold on you - perhaps an addiction, a struggle with depression or suicidal thoughts, or guilt from a past mistake - dear reader, find someone to talk to. Experience the freedom that comes with bringing things into the light.

2. The Power of Friendship

Friendship is, in many ways, the foundation of Tolkien's stories. The friendship between Frodo and Sam in the original trilogy is one we should all aspire to have in our own lives. They are a beautiful picture of biblical friendship and what it means to truly be there in times of joy and mourning. To give encouragement and bear one another's burdens (which Sam does quite literally!). While we are still just getting to know the characters in The Rings of Power, there are many profound friendships I think we can expect to see.

We first see a strained friendship between the elf Elrond and dwarf prince Durin. In a touching scene between the two, Durin shares that he is hurt because Elrond missed significant moments in his life. He married and had children, and his best friend missed all of it. The next time he did visit was to ask for something. I don't know about you, but this made me stop and evaluate how good of a friend I've been. Are you there for your friends, in moments happy and sad? Do you rejoice in their victories and sit with them in mourning? The Bible speaks of a friend who sticks closer than a brother. Do you have someone like that in your life? Biblical friendship is a blessing, and something tells me The Rings of Power will touch on this more and more as the seasons unfold.

"If either of them falls down, one can help the other up. But pity anyone who falls and has no one to help them up." Ecclesiastes 4:10

"One who has unreliable friends soon comes to ruin, but there is a friend who sticks closer than a brother." Proverbs 18:24

3. The Lord Uses the Least Expected 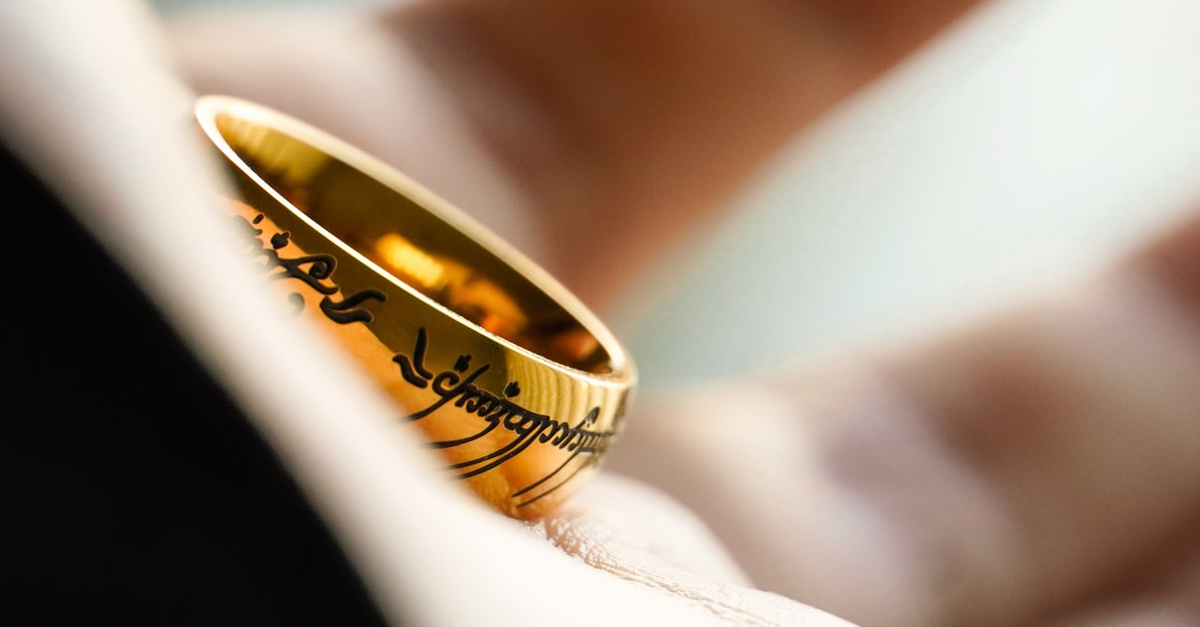 This theme started with Frodo, a hobbit. He is not strong, powerful, or particularly brave, yet he brings the ring to Mordor and ultimately destroys it. In the words of Galadriel, "Even the smallest person can change the course of the future." While there are no hobbits in The Rings of Power, there are harfoots, distant relatives who similarly embrace a quiet life of peace and no adventure. Nothing unexpected. Yet a young harfoot named Nori finds herself doing just the opposite as she helps a mysterious man who fell from the sky. Everyone discourages her from helping, but still she feels as though it is her calling.

The Lord does mighty things through His followers. As people often quote, "God doesn't call the equipped; He equips the called." Think of Moses as just one example. He was not exactly ecstatic that God wanted to use Him to free His people from Pharaoh.

"Moses said to the Lord, "Pardon your servant, Lord. I have never been eloquent, neither in the past nor since you have spoken to your servant. I am slow of speech and tongue."

The Lord said to him, "Who gave human beings their mouths? Who makes them deaf or mute? Who gives them sight or makes them blind? Is it not I, the Lord?" Exodus 4:10-11

And yet, the Lord is faithful and equipped Moses for the work ahead of him. Do you ever compare yourself to those who are "more spiritual" than you? Are you scared of going on a mission trip, leading a Bible study, or saying "yes" to an opportunity because you feel unworthy? Don't limit what God can do - it is far more than we can comprehend. Be open to how He wants to use you as a vessel, and trust that He can use anyone to change the course of the future.

These are just three ways in which Amazon's The Rings of Power stands out. It is refreshing to watch a series without fear of what they will show in the next scene. We are constantly bombarded with things of this world left and right - greed, lust, revenge - the list goes on. It is hard to find a show these days that doesn’t leave me feeling dirty and even dark. My mood is significantly altered by what I watch. If I immerse myself in a world centered around sinful acts, I’ll leave the couch feeling engulfed in them myself. As Christians, The Rings of Power has themes we can celebrate. While I will still be enjoying The Lord of the Rings trilogy this winter, I will also tune into this show and can't wait to see where it goes.

Leah Arthur is the Family Editor of Crosswalk.com. She graduated from James Madison University with a B.A. in English and minors in Creative Writing and Writing, Rhetoric, and Technical Communication.

This content first appeared on Crosswalk.com and is used here with permission. To view the original visit: https://www.crosswalk.com/special-coverage/tolkien-hobbit-lord-of-the-rings/in-a-fallen-world-the-rings-of-power-stands-out.html