When I finished writing The Faith of Condoleezza Rice in 2007, I was approached by a publisher and asked to write a faith-based biography about another leading political figure. I knew the individual professed to be a Christian, and because I was given access to their inner circle, I agreed to write the book. As I dove into the project, I hit a wall. There was absolutely no external evidence of their faith. After a couple of months of hitting dead-ends I went back to the publisher. If they wanted a manuscript about that individuals’ faith to be written, I wasn’t the one to write it.

Jump ahead ten years to the summer of 2017 when I had a dream that God told me to write The Faith of Mike Pence. I have to admit I was a little skeptical. I got out of bed and began a two-and-a-half-year journey that has led me through 60 years of spiritual transformation in a man’s life that has left me inspired, encouraged, and challenged in my own life. So, what is it about Mike Pence that sets him apart from the typical politician who claims faith as a badge to be worn during the campaign, but to be disregarded once the votes are cast and the ballots counted? Allow me to share three with you.

1. The Power of Conviction

It was 1990 and six months after Mike’s first Congressional campaign. The twenty-nine-year-old’s first faith-filled, personable campaign style had helped him capture 47 percent of the vote against incumbent Democrat Phil Sharp. It was the closest race in the districts history and he was convinced he could win this time. He was so focused on winning however, that when he hit a crossroad and Washington consultants encouraged him to go negative and degrade his opponent, he followed their advice and ended up losing to Sharp by 19 points. It wasn’t just the loss of the race that crushed Mike’s spirit, says long-time friend Jay Steger, it was a confrontation of his behavior from the Lord.

“It was a huge turning point in his life to say, ‘What kind of leader do I want to be? What kind of person am I? And effectively, he just realized, ‘I just threw the whole spiritual side of me out the window because I wanted to be a congressman.’” Steger says that Mike was in real pain as he agonized over his actions. “There was very serious soul-searching as he worked his way through that loss and behavior…He was humbled. This wasn’t something that took a week or two or three to figure out. This was a long, difficult [soul-searching].”

Mike sought God’s forgiveness. While most politicians would sweep it under the rug at that point, Mike took it further. He went to Sharp and asked forgiveness. Later, he wrote an essay called, “Confessions of a Negative Campaigner” for Indiana Policy Review. Beginning with“It is a trustworthy statement, deserving of full acceptance, that Christ Jesus came to save sinners, among whom I am foremost of all” (1 Timothy 1:15), it received national attention for its humility, transparency and remorseful tone.

Mike had the essay framed, hung it on his office wall, refers to it often and gives copies freely to staff, those he mentors, and up and coming politicians who seek his wisdom. He credits it as a time in his life of spiritual transformation (Romans 8:28).

Mike was headed to a House Agriculture Committee meeting at the Capitol when the devastation and chaos of 9-11 ensued. After praying with his staff and making sure everyone was evacuated, and calling Karen to let her know he was safe, he felt he needed to report for duty. With pitch black smoke billowing from the Pentagon, sirens screaming from every direction, people hemorrhaging from buildings and scattering in different directions, and the country at its most vulnerable, all congressmen were being told to ‘spread out, go home, go somewhere, but don’t stay at the Capitol,’ says Steger. All the other congressman and support staff had already left the area, but Mike immediately pushed back and asked the Capitol Police, ‘Where is leadership gathering?’ At first, they wouldn’t answer him, begging him to leave, but Mike kept persisting.

Mike joined the House and Senate leadership at the United States Capitol Police headquarters across the street from the Capitol and began to pray. Mike “gets there and he was a young congressman, a first termer,” says Steger. “So, here he is, just a rookie…He’s shocked, but thinking clearly, saying, ‘I have a responsibility. I’m an elected congressman. I’m not running for the hills and I’m going to fulfill my duties here.’” During that time, Mike says, “I thought of that verse [from Isaiah 26:3] that says the Lord will surround in perfect peace the man who trusts in Him. And I can honestly tell you…I knew we were all going to be okay. I had peace in the midst of that pandemonium and I’ll carry that the rest of my life...”

"You will keep in perfect peace those whose minds are steadfast, because they trust in you." Isaiah 26:3

3. A Man of His Word and Conviction

When Mike Pence was getting ready to fulfill his first year in Congress in 2000, he asked several of his friends to pray that his, ‘yes’ would be ‘yes’ and his ‘no’ would be ‘no’ (Matthew 5:37). In the nineteen years since, he’s never wavered. From his first days as a freshman congressman, Mike petitioned President George W. Bush to reinstate a ban on federal funding of human embryo research. The debate between the two men rested on a conflict between “scientific progress” and religious conviction. Mike firmly believes that life begins at conception.

In a July 2001 address on the House floor, Mike said, “Adult stem cell research is pro-life, but destroying nascent human beings for research is not pro-life...” He concluded by urging Bush to “do justice, enforce the law, and choose life so that we and our children may have life.” With few supporters backing him in his efforts, Mike stood tall and wouldn’t back down. Ultimately, he swayed the heart of the evangelical president.

Since that time, Presidents have personally met with him in an attempt to sway his vote to be contrary to Gods and he’s never budged. Lobbyists have done their best to influence his views. Other politicians have tried to make “deals” where they scratch his back and in “appreciation,” he’d scratch theirs while compromising his values, and he’s gracefully declined repeatedly. Mike Pence would shy away from wanting to be called a spiritual hero, but what I've learned about him is that he's a man who lives his faith, a man after God's own heart, who seeks to fulfill His will for his life, that of his family, and for our nation. 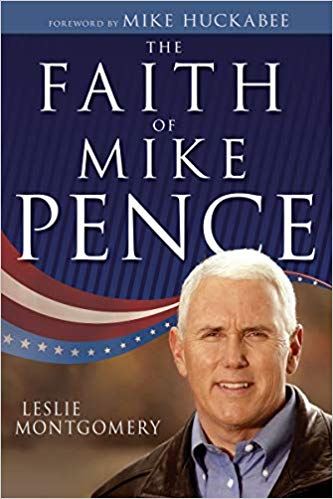 The Faith of Mike Pence (August 6, Whitaker House), from author Leslie Montgomery (The Faith of Condoleezza Rice) contains exclusive interviews and commentary from friends, family, and colleagues to give an intimate look at the life and faith of the vice president of the United States.

This content first appeared on Crosswalk.com and is used here with permission. To view the original visit: https://www.crosswalk.com/culture/books/inspiring-ways-mike-pence-lives-his-faith.html

Choosing to Accept Grace in Everything - Encouragement for Today - August 13, 2020