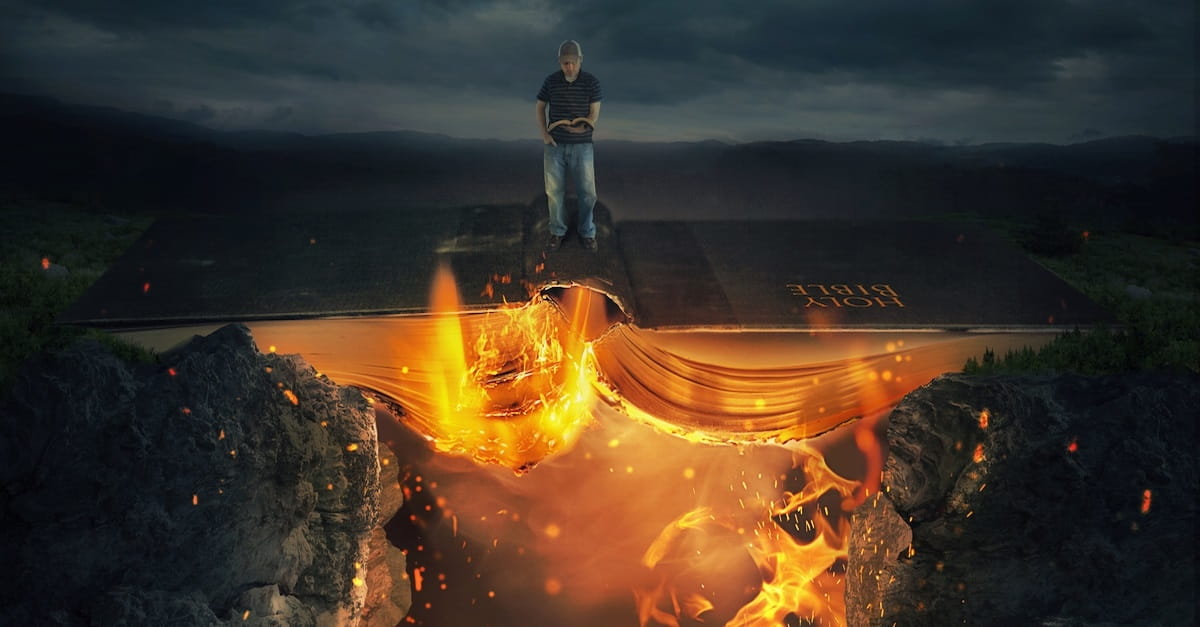 But the cowardly, unbelieving, abominable, murderers, sexually immoral, sorcerers, idolaters, and all liars shall have their part in the lake which burns with fire and brimstone, which is the second death.  – Revelation 21:8

The best-selling religious books these days are about heaven. But there must be a hell.

Write a book about how you died for a few minutes and experienced a momentary jolt of unimaginable nirvana and publishers will line up to print it. They know the book-buying public is eager to get a glimpse through that scary curtain of death…so long as what’s shown agrees with their preconceptions and supports their hopes.

Ross Douthat is a columnist for the New York Times. In a column titled “A Case for Hell,” he writes, “Even in our supposedly disenchanted age, large majorities of Americans believe in God and heaven, miracles and prayer. But belief in hell lags well behind, and the fear of damnation seems to have evaporated.”

Near-death stories are quick to sell. The Boy Who Came Back from Heaven tells of a child’s return from paradise. However, you’ll search in vain for The Investment Banker Who Came Back From Hell. Note: A comment from a pastor friend does indicate, however, that there are a number of such been-to-hell books on the market these days.

What Scripture Teaches about Hell

Let’s interrupt here to make a few statements on what Scripture teaches about hell, bearing in mind that the Hebrew word Sheol and the Greek concepts of hades and gehenna figure into more detailed and scholarly discussions of the subject.

The following three statements are solid and agreed upon by almost all Bible-believers:

1. Jesus is our authority on hell, just as He was on heaven (John 3:12-13). He is said to have spoken more on hell than on heaven, although I’ve not checked on that.

2. Hell is horrible beyond description, regardless of how much of the Scripture’s teaching is literal and how much symbolic. It is the “horrible pit” of Psalm 40:2, the fiery Hades of Luke 16:23, and the lake of fire and brimstone of Revelation 21.

3. Hell was not prepared for people, but for the devil and his gang (Matthew 25:41).  Anyone who goes there will be forever out of place.

Now, back to Ross Douthat’s article.

Douthat blames the disenchantment, this unbelief, regarding hell on “growing pluralism,” among other things.

So what is ‘growing pluralism?’ These days people of all religions live on our block, go to our schools, shop in our stores, and are no longer abstractions. So, when we consider the question whether those-who-do-not-believe-in-Jesus go to hell or not, we are asking about some very real people we know personally and not the impersonal heathen of some distant continent.

The question of hell is an issue Bible-believers need to come to grips with, even though nothing about it is fun to study or exciting to debate. No one wants there to be a hell.

On that day, a SWAT team from the U.S.Navy dropped in to a compound just outside Islamabad, Pakistan, and took out Osama bin Laden.

Americans were quick to react, almost all enthusiastically endorsing his dispatching. Religious leaders chimed in. Hardly a FaceBooker resisted the temptation to say something about bin Laden’s execution. Many consigned him to the lowest depths of hell. I mentioned it myself.

My next Facebook note said: Those who say they do not believe in hell may be having second thoughts now. After all, bin Laden’s one death cannot begin to pay for all the hundreds of deaths he has accounted for. Without a hell of some kind, there is no justice in the universe.

Without hell, there is no justice in the universe.

Write that down in big letters. It’s one of the most solid truths to be found. Stay with us now.

In his thought-provoking article, Douthat notes how modern—we would say ‘liberal’—preachers and theologians rush to dismiss hell as an antiquity, as something religion has outgrown.

He says, “Doing away with hell…is a natural way for pastors and theologians to make their God seem more humane. The problem is that this move also threatens to make human life less fully human.”

God Gives Us Will to Choose

Douthat: “If there’s no possibility of saying no to paradise, then none of our no’s have any real meaning either.”

That is, the universalism that says a good God will take everyone to heaven and send no one to hell has just robbed us of choices and stripped life of its meaning.

If we are automatically sentenced to heaven—there being no possibility of hell—Douthat writes, “(That’s) like home runs or strikeouts in a children’s game where nobody’s keeping score.” It’s rather pointless.

As a result,  there is no incentive to do right. And therefore, no moral order in the universe.

“It makes us prisoners of God himself. We can check out any time we want, but we can never really leave.”

So, now, he makes his case for the doctrine of hell. I find this fascinating.

The Case for Hell

Douthat reasons: The doctrine of hell assumes that our choices are real, and that we are the choices we make. The miser can become his greed, the murderer can lose himself inside his violence, and their freedom to turn and be forgiven is inseparable from their freedom not to do so.

Douthat likes what Anthony Esolen wrote in the introduction to Dante’s Inferno. The idea of hell is essential to Western humanism. It’s a way of saying “things have meaning.” That earthly life is more than just one trivial thing after another, and that the “use of man’s free will, at one moment, can mean life or death…salvation or damnation.”

Bottom line, then, is this: If there is no hell, and if all mass murderers are in heaven, then nothing has meaning, there is no justice in the universe, and we are fooling only ourselves with all our religious talk.

Without Hell, Where Is the Meaning of Salvation?

If there is no hell, there is no salvation because there is no sin, no way to escape going to Heaven at the end. Thus, life on earth has just become meaningless.

This does not mean we have to like hell. We hate the very idea of hell. But it’s a necessary element in a moral universe. There must be a hell if we expect any of this to make sense.

There must be a hell. So, what are we to do?

With Hell as a Reality, Here’s What Believers Can Do

We who take God and His Word seriously must do a number of things, including:

1. No more condemning.
God’s people must quit speaking of hell as though they themselves are the gatekeepers and able to determine who goes there.

2. Many more tears.
We should have our hearts broken by the very idea that some people we know—or any individual ever!—will be residents of that place of eternal torment forever.

3. Preach the Word.
We should encourage our preachers and teachers to speak God’s truth on the subject of hell. These should be well-thought-out messages that exalt God’s glory, offer salvation to all who repent and trust Christ, and warn people to take hell seriously. We should support those who do when some begin to complain and find fault.

4. Share Christ.
Be faithful in witnessing and praying for the lost. “Knowing the terror of God, we persuade men” (2 Corinthians 5:11).

What Not to Do in the Case for Hell

On the other hand, let us not do some other things…

1. Let us not threaten lost people with hell.
The temptation to do that must be avoided at all costs. I don’t see anywhere in Scripture where God speaks of hell to the down-and-out unsaved. Instead, it seems to be the religious bunch who gets that warning.

This realization hit me when I was taking a group of men from our church to the state penitentiary twice monthly to hold services and counsel with those wishing to receive Christ. These men needed not messages of judgment, but rather to know of God’s love and Calvary’s gift of eternal life.

To the religious hypocrites, Jesus was brutal. You serpents, you generation of vipers, how can you escape the damnation of hell (Matthew 23:33)? I tell you, no! But unless you repent, you too will all perish. (Luke 13:3, Luke 13:5)

That little broadside was aimed at the Pharisees, we remind ourselves. And they were the keepers of orthodoxy, the most conservative-minded defenders of God and morality on the horizon at the time. One wonders if messages of hell should be proclaimed toward many in our own churches instead of those on skid row and in flop houses.

2. Don’t make fun.
Let us not make jokes about hell, about the devil stoking the fires, and such foolishness.  Let us not make light of such a serious subject.

3. Let us not casually consign anyone or any group to hell.
Even if I believe Jehovah’s Witnesses are miserably wrong on 100 major points or that Islam misses the mark in every way that matters , our Lord alone will decide who goes to Heaven and who does not. He who sees the hearts knows what is there and what is absent. We will gladly leave the judging to Him.

4. Let us not, however, major on hell, as though that were our primary message.
I saw a church sign with these messages on opposite sides: “Repent or burn in hell forever” and “Are you driving your children to hell?” The messages they convey may be valid but they send the wrong message to the community. Our Lord did not come to condemn the world, but that the world through Him might be saved (John 3:17).

We are New Testament evangelists, bearers of good news, offering forgiveness and eternal life to all who trust in Jesus. For God so loved the world that He gave His only begotten Son that whosoever believeth in Him should not perish but have everlasting life (John 3:16).

The wonderful Jerry Clower used to say, “There is only one place in the universe where there is no laughter. And I’ve made arrangements to miss it.” Amen.

This content first appeared on Crosswalk.com and is used here with permission. To view the original visit: https://www.crosswalk.com/blogs/joe-mckeever/why-there-must-be-a-hell.html